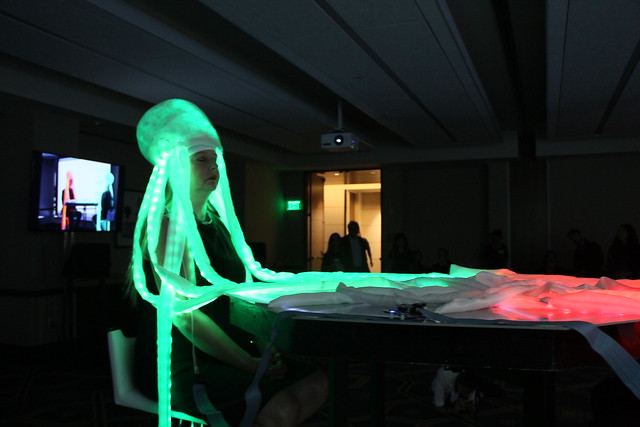 Brainstorming is a series of collaborative works between Professor Victoria Vesna and Neuroscientist Mark Cohen, who created and co-directs the UCLA/Semel NeuroImaging Training Program. Together we are exploring the possibilities of brain to brain communication. For me, these are part of a larger area of research into the physical associates of mental processes such as emotions and feelings.

Brainstorming: Empathy is a performance/experience work presented first at the Gradn Opening of the UCLA Luskin Conference center on October 7, 2016.

For almost a century, people have been fascinated and perplexed by the rhythmic electrical signals that can be detected on the surface of the head. Scientists call this the “electroencephalogram” or EEG, but “brainwaves” is the more commonly used description.
Mark Cohen drawing brain storming diagram from Art|Sci Center on Vimeo.

Brainwaves were observed first in humans by Hans Berger in the late 1920’s during his secretive work to understand the basis of extrasensory perception. He reasoned that these electrical signals might be transmitted like radio, allowing people to share each other’s thoughts. Although few scientists (then or now) shared this view, Berger’s discovery of the EEG changed clinical medicine. These recordings are invaluable in the management of diseases from brain tumors to sleep disorders. 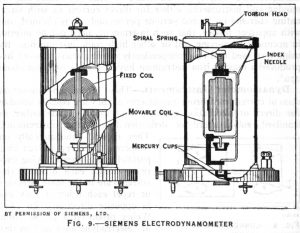 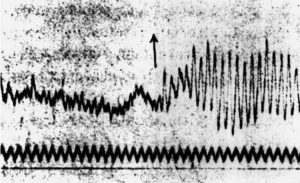 Even from the earliest days, it was clear that the structure of our EEG depends on our mental state. Although they cannot easily describe how they do it, people can “control” their own brainwaves by changing their mood, or by guided practice, such as meditation.

Brainstorming: Empathy brings Berger’s perhaps magical dreams to life by measuring the brainwaves of people simultaneously and then, through sophisticated mathematical analysis, measuring how similar their brain signals are to each other. Feedback, in the form of music and lights, expresses those coherences in a way that allows participants to deepen their communication, while sharing their experience with the audience, whose own brain signals necessarily become synchronized to the recordings.

Technical notes Electrodes placed on the heads of the two active participants in Brainstorming: Empathy record tiny signals (from 1 to about 100 µVolts). These are transmitted wirelessly to computers that first filter out various electrical artifacts, then run the signals through a sliding window Fourier transform, measuring the signal energy at 60 different frequencies between 1 and 60 hertz. The signal strength in several crucial frequency bands: 8-14 Hertz (alpha) and 4-7 Hertz (theta) are further analyzed for their phase synchrony (transient phase locking). We use the signal amplitude covariance, and the spectrally-bound phase synchrony, as measures of signal similarity of the active participants. In addition, we measure the band powers of the other EEG signals. A total of eight calculated parameters from the EEG are derived and passed to the display and acoustic environment.

Specially commissioned audio recordings, made by jazz artist, Kenton Chen (kentonchen.com), contain eight separate overlapping vocal recordings that are part of a single piece, like eight separate instruments in an octet. The brainwave synchronies control the mix of these audio tracks. Each of the audio tracks emanates from a different location in the room, giving increased spatial depth to the experience.

Each octopus crown is illuminated by over 300 digitally controlled LED lights. All four of the crowns: the two worn by the active participants, and the two worn by circulating volunteers, receives wireless signals from the EEG computers. The colors of the LEDs are algorithmically controlled by the EEG signals, such that they display both the brainwave activity of a single individual, and the measured similarity of the two participants. The similarity measures are present principally in indigo colors.

The octagonal table, at which the participants sit, also is illuminated by the brainwave similarity signals.

Brainstorming: Synaesthesia is a work presented at Sonos Studios in 2014.

The first installation of the Brainstorming series took place at the Beall Art Center in 2012.

A catalog of the Art+Brain collaborations was published in June 2016, and contains extensive writeups by the artists.