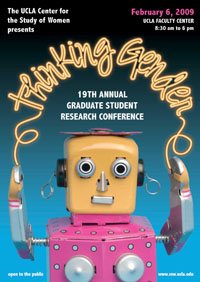 Thinking Gender is a public conference highlighting graduate student research on women, sexuality and gender across all disciplines and historical periods. I was so impressed by the number of young scholars who gathered, the level and diversity of research in this area. The panel I moderated was “Cyberlicious with a Byte” – a bit of a blast into the past. Not only because of the title that was so 90’s but also the James Hixon’s paper on Information bodies / Bodies without organs from Deleuze andJennifer Kavertsy’s paper on avatars and the gaze in Warcraft. I was disappoined that Suepattra May from UC SF, Anthropology, History and Social Medicine, was not able to show. Danielle Hidalgo and Tracy Royce gave a paper on Online Queer Pornography using Crash Pad as an example. Haven’t seen this before and found it quite intriguing, although I have to say, once again it was a flash from the past with the sociology department at UCSB that seems to focus on edgy, sexual issues. It did make me think about the NanoBod game we are conceptualizing in relation to female identity and science. Morphing bodies and moving inside to genetically engineer and shape shift…….